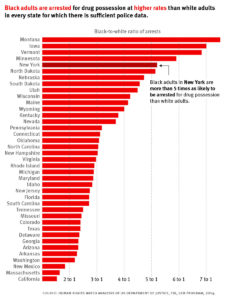 A spokesperson for the Iowa ACLU says a study by the national ACLU and Human Rights Watch found a huge disparity in how whites and blacks in the state are treated when it comes to drugs.

“A black person in Iowa is seven times more likely to be arrested for drug possession than a white person — even though studies find the two races use drugs at about the same rate,” according to Veronica Fowler. Nationwide, a black person is two-and-a-half times more likely to be arrested than a white person. Iowa is second in the nation for that disparity in arrests, behind only Montana. Fowler says this study follows up an earlier one on marijuana.

“A black person in Iowa is eight times more likely to be arrested for marijuana possession than a white person in Iowa,” Fowler says. “And again that just shows how people are treated very differently.” Fowler says this latest study reinforces the need for some change.

“I think one thing we definitely need to do is look at our drug laws in this state. I think our state legislature needs to consider decriminalizing various illicit drugs, because the war on drugs we started in the 1970’s just isn’t working,” Fowler says. She says the failed efforts to create and then change Iowa’s medical marijuana law don’t give much hope that something will be done with the overall drug issue. Fowler says it is something that needs to be addressed.

“It is a public health problem, we are filling up our prisons, we are devastating our families, devastating our communities, with no indication that it’s doing any good,” Fowler says. She says the cost to house people for drugs crimes is taking away resources that could be used for other things.

Fowler says Iowa is one of only three states that automatically and permanently takes away a person’s right to vote after a felony conviction, and that is another impact from the failed drug war.