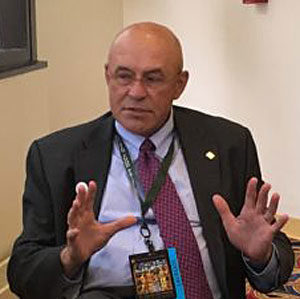 The 2016 World Food Prize will be formally presented to four scientists tonight during a ceremony at the Iowa State Capitol in Des Moines.

Meanwhile, a past laureate is crediting the prize’s founder with the idea of helping small farmers produce more with technology. Robb Fraley of Monsanto says Norman Borlaug wondered in the early 90s how to get biotechnology into the hands of small farmers.

“So just imagine this…I mean, this is three or four years before Roundup Ready soybeans or Bollgard cotton is launched in the U.S., Norm was already thinking about how this could help small farmers in India and Africa,” Fraley said. Fraley acknowledges that his winning the World Food Prize in 2013 was controversial because of his work developing GMO crops, but he says it fits well with Borlaug’s Green Revolution.

“If you help farmers, it’s a double win, because not only do you address food security, because food production by small holders is critical, but small holders represent the bulk of the world’s rural poor. So, you address both hunger and poverty at the same time,” Fraley said.

Borlaug, who grew up in Cresco, has been called “the father of the Green Revolution” and is credited with saving a billion lives from starvation by developing high-yielding wheat varieties. He was awarded the Nobel Peace Prize in 1970 and founded the Iowa-based World Food Prize in 1986.

Borlaug died in 2009 at the age of 95. The four scientists who are sharing this year’s World Food Prize are Doctors Maria Andrade of Cape Verde, Robert Mwanga of Uganda, and Americans Jan Low and Howarth Bouis.

All four specialize in biofortification — or the breeding of vitamins and micronutrients into crops.