You are here: Home / Sports / Class 4A powers collide in Ankeny 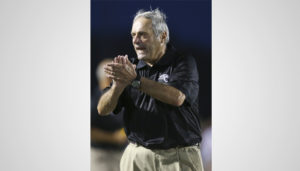 Third ranked Ankeny Centennial can lock up the district two title at home against second ranked Dowling Catholic. It matches two of the top running teams in the state.

“Ankeny Centennial is more misdirection and deception and they do a good job of running that system that coach (Jerry) Pezzetti has run for many years”, said Dowling coach Tom Wilson. “We kind of split ours between two backs and we are more straight forward and here we come. It will be interesting to see how it plays out.”

Ankeny Centennial is 7-0 and moved to within a game of the district crown after rolling to a 55-0 win at Ames last week.

“It was considered to be between Dowling, Centennial and Ames to see which two teams would move on and we had a great game up there”, said Pezzetti. “I was so proud of our team for what they did.”