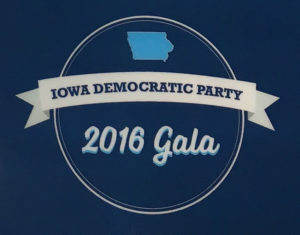 Hundreds of Iowa Democrats gathered this evening for a party fundraiser in Des Moines, with the focus on what party chairwoman Andy McGuire called the “election of our lifetime.”

Former Iowa Governor Tom Vilsack asked the crowd to work harder than they’ve ever worked before. 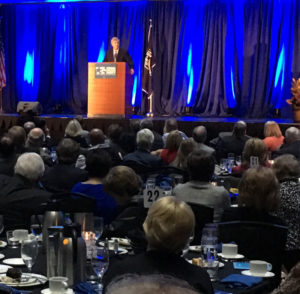 Vilsack said, his voice rising as the crowd rose to applaud and cheer.

Vilsack concluded with this: “Let’s get to work!”

All the Democratic candidates running for federal office spoke at tonight’s event. It was held in the same room where Iowa Republicans held a fundraiser last Saturday and where the GOP’s chairman had admitted many Republicans were both disgusted and disheartened by vulgar comments Donald Trump made about women on a “hot mic.” 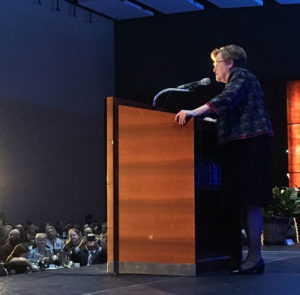 “Chuck Grassley voted against the Violence Against Women Act in 2012 and then he doubled down and he did it again in 2013,” Judge said, and a woman in the crowd yelled: “That ain’t right.”

Judge continued: “It is clear to me that he shared Trump’s warped views about women.”

Grassley has called Trump’s comments “shameful,” but neither Grassley nor other top Republican officials in Iowa have not withdrawn their support of Trump. Dave Loebsack of Iowa City — the only Democrat in Iowa’s congressional delegation — said tonight that Republicans who support Trump are putting politics “over the human race.”

Jim Mowrer of Des Moines, the former Iowa National Guardsman who’s the Democrat running in Iowa’s third congressional district, drew tonight’s crowd to its feet with this: “Donald Trump cannot become commander in chief and the Republicans who support him deserve to be thrown out of office.”

“This is not a time for clowns,” Castro said near the end of his remarks. “…For America to win in November, Donald Trump has to lose.”