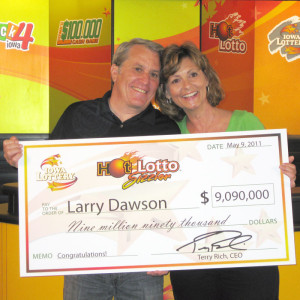 A Polk County judge dismissed one of five counts in a lawsuit filed in connection with the December 29, 2010 Hot Lotto jackpot drawing that was never paid out after questions arose about the identity of the person who bought the winning ticket.

Larry Dawson of Webster City won the next jackpot in May after the prize was reset and later sued the Multi-State Lottery Association and the Iowa Lottery saying he should get the money from the unpaid jackpot as well. Dawson’s attorney Nick Mauro says they are happy to see the judge is allowing all but once of the issues they raised to move ahead.

“This allows us to go forward now and to proceed with the actual guts of the lawsuit to learn how this happened, why this happened, how it could have been prevented and why it wasn’t prevented,” Mauro says. He says they are contending the lottery operators violated their own rules by not giving the entire jackpot to Dawson.

“According to their own rules and the way that they operate the game — anytime there is not a winner from a drawing — the money in the jackpot is required to be carried over until somebody does win in a drawing,” Mauro explains. “In this particular case we know there was no drawing because the machine was rigged before the game took place. Rather than the money rolling over, the money was returned to the Iowa Lottery Authority and the other state lotter authorities to use however they ended up using it.”

The Iowa Lottery gave the money away in another lottery promotion. The Iowa Lottery claims immunity from the lawsuit because it paid Dawson following his win on May 7th. But Mauro says they didn’t pay what they should have.

“The lottery is only immune when it pays the designated prize — the full prize that is part of the rules they create for the game,” Mauro says. “So in this particular case, the designate prize is the amount of the jackpot, which is required to be all of the money that carries over from all prior jackpots until there is a winner.” Mauro says his client was due much more money than he got.

He says the lump sump payment was six million dollars before taxes and had the money properly carried over from the jackpot that was rigged and not paid out, it would have been 16 million dollars. Mauro says they still have a lot of work ahead in this case.

“Now that this part is done, the Iowa Lottery Authority and the Multi-State Lottery Association will be required to file a formal answer to each one of allegations that we set forth in our petition,” Mauro says. He says once they answer they will move ahead with preparing the documents for the lawsuit. The former information security director for the Multi-State Lottery Association, Eddie Tipton was convicted of fraud in rigging the jackpot. Investigators then started looking into other jackpots won by Tipton’s brother and others.