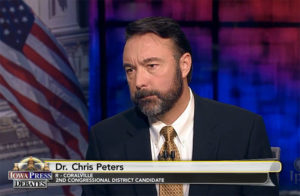 The Republican candidate in Iowa’s second congressional district says his “long term, strategic vision” would be to have states and local governments cover the costs of flood prevention and recovery efforts.

Chris Peters, a surgeon from Coralville, says the ultimate goal should be to have the federal government less involved.

“One of the fundamental problems we seem to be facing whether it’s infrastructure, flood mitigation, etc. is trying to get money back from D.C. rather than trying keep it in the state to begin with,” Peters says.

Peters doesn’t see that happening “in the next two years,” but Peters favors lowering federal taxes, eventually, and having states and cities raise the taxes to deal with local infrastructure issues. Due to bureaucratic issues, the City of Cedar Rapids is still waiting for federal funding of flood prevention that congress has approved.

“I think ultimately we are going to have to move away from sending so much of our tax dollars to D.C. in the first place and then hoping, bargaining, begging to get the money back when we need infrastructure projectrs, flood mitigation, etc.,” Peters says. “…I think we’ve become too reliant on the federal government to be able to be a grand overseer of all our needs.”

Peters is challenging Democratic Congressman Dave Loebsack’s bid for reelection. Loebsack says cities struggled to raise local taxes just to match what the federal government spends on things like rebuilding after the 2008 flooding.

“That’s why Iowa City, just for example, opened Hancher Auditorium and a number of other buildings are going to be opened soon,” Loebsack says. “We were able to get hundreds of millions of dollars from the federal government into my congressional district.”

Loebsack and Peters made their comments Friday during an hour-long “Iowa Press” forum broadcast on Iowa Public Television.