You are here: Home / News / Branstad has confidence in election, but warns some fraud will occur (AUDIO) 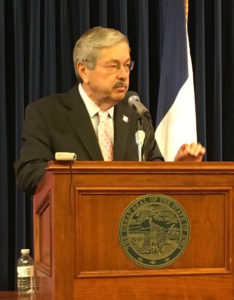 Iowa’s Republican governor this morning said he trusts Iowa voters, but Terry Branstad warned “there are attempts at voter fraud” that need to be stopped.

“I still have confidence that our…election system which is basically controlled by the states and by the local people that they’re going to do their level best to see that we have a fair and honest election,” Branstad said during his weekly news conference.

However, Branstad said Iowa’s county auditors who are conducting the election won’t be able to catch all the cheaters.

“They try,” Branstad said of local election officials. “They do their level best. Nobody’s perfect.”

For instance, Branstad anticipates some out-of-state students will vote here in their Iowa college town, but also in their home state.

Donald Trump has been saying the election is “rigged” and he sent this tweeted this morning: “Of course there is large scale voter fraud happening on and before election day. Why do Republican leaders deny what is going on? So naive!”

Branstad told Iowa reporters the “mainstream…national media” is “biased” against Trump and hasn’t given voters a “complete picture” of where the candidates stand on important issues. Branstad said he’s confident Iowa voters, though, are able to focus on what they care about.

“I’ve always supported the electoral process,” Branstad said. “I’ve always been proud of the participation we see in Iowa and I’m anticipating a great result.”

A new Politico poll released this morning found 81 percent of Trump’s backers think the election could be stolen from Trump. A Washington Post poll has found half of Trump’s supporters are “not confident” votes for president will be “accurately counted” this year.

“It is a dark day for the Republican Party when their nominee is undermining the integrity of our election system before the election has taken place,” McGuire said.