You are here: Home / News / Iowa’s Secretary of State: ‘Elections are not rigged.’ (AUDIO) 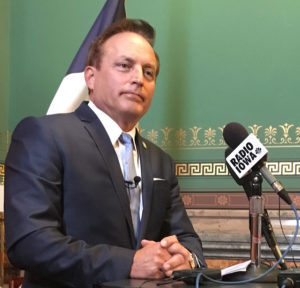 The state’s commissioner of elections held a news conference early this afternoon to make this very public declaration: “I can assure you and all Iowans that elections are not rigged. I pledge to every Iowan that you will be able to cast your vote and your vote will count in this election.”

Republican Paul Pate is Iowa’s secretary of state and that means he is the state’s top election official. Pate said he and Iowa’s 99 county auditors take the “integrity” of voting seriously and Pate told reporters “it is not helpful” to have Donald Trump tweeting that there is “large scale voter fraud” happening in America.

“Even though Iowa has one of the best and cleanest and fairest election systems in the country, we don’t need people giving out misinformation specifically about our state,” Pate said. “I don’t know exactly what references Mr. Trump is making about voting problems. If he would like to be more specific, I’m sure the local state officials in those states will look into it and try to deal with it. I can assure you in Iowa if someone brings it to my attention, we’re going to do everything we can immediately to address it.”

In addition, Pate is trying to tamp down the idea that somehow computer hackers would be able to manipulate voting totals.

“There seems to be some misconceptions,” Pate said, “so there is no internet hacking involved in that process.”

Iowa’s paper ballots are fed into optical scanners which creates a tally of votes and Pate said people can go back and count “every single ballot” to make sure the results are valid.

This morning, Governor Branstad said he has confidence in Iowa’s election system, but Branstad warned there may be some cheating, plus Branstad said people believe the election is “rigged” because of the way the national media is covering the candidates.

“Having been a candidate I can say that I don’t always agree with what and how the media might cover my particular situation. That doesn’t mean we’re talking about the physical, technical side of an election,” Pate said. “That’s apples and oranges to me.”

A reporter asked Pate if there was “widespread voter fraud” in Iowa. His immediate and short answer: “No.”

“I am telling you that Iowans can be confident in our election system,” Pate said. “We have the checks and balances. We work on a bipartisan basis and our office as well as the county offices are open to anyone who sees any potential problem to make sure the integrity is maintained.”

Pate said local election officials are looking for more people to work at precincts on Election Day. There are poll worker slots, plus the two major parties are allowed to have “poll watchers” who report potential problems in the precincts. The poll watchers, however, are not to interfere directly with a voter, but they can file a challenge of a voter’s ballot once it is cast.