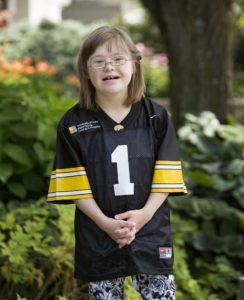 A 10-year-old girl who’s faced nearly constant health challenges will serve as “Kid Captain” when the Iowa Hawkeyes take the field against Wisconsin on Saturday.

Emeline Dunham is the daughter of Bill and Barb Dunham of Wapello. In a video produced by the U-I, Barb talked about learning her daughter was born with Down Syndrome.

“Having been told that we wouldn’t be able to have children, trying for five years, and just being told that wasn’t going to be in our future — just getting pregnant and having her was a blessing, a joy, and a miracle. That’s what she’s continued to be,” Dunham said. At the age of three, Emeline was diagnosed with Addison’s disease, a potentially life-threatening disorder if left untreated.

Her mother recalled Emeline’s stint in the U-I Hospital Pediatric Intensive Care Unit. “I was alone with her and the doctor said ‘if you have family that needs to see her, you better call them now,'” Dunham said, wiping away tears. Emeline recovered, but three years later was diagnosed with stage three kidney disease. Barb Dunham says her daughter, now 10, continues to smile through all her health struggles — and is known for her hugs and loving nature.

“Emeline and her health challenges have taught me that every day is a gift and not to waste it, because we don’t know what tomorrow will be,” Dunham said. The Kid Captain program, now in its 8th year, is a partnership between UI Children’s Hospital and the Iowa Hawkeyes to honor pediatric patients and celebrate their inspirational stories. The kickoff for Saturday’s Iowa-Wisconsin game at Kinnick Stadium in Iowa City is set for 11 a.m.