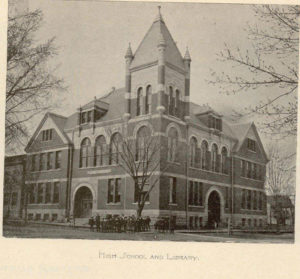 The historic Roosevelt School in Clinton has been converted into 16 apartments. Matt Hauge is with the firm that restored the 128-year-old building, which is listed on the National Register of Historic Places.

These apartments, you’ve living in mostly what was a piece of a classroom or maybe an entire classroom,” Hauge says. “…The original chalkboards are still there and, in some units, have been cleaned up and look like they were just installed. You get these amazing ceilings that might be…close to 20 feet high and you get these enormous windows that we just don’t build into buildings anymore, hardwood floors and kind of the works.”

The building opened in 1888 and served as Clinton’s high school until 1922. Elementary classes were held there until 1974. The building’s “Romanesque” architecture features gables, turrets and rounded arches above doors and windows. There’s also a tower where many Clinton High graduates carved their names. The names were not erased during the restoration.

One of the names carved in the tower is one of Clinton’s most famous citizens. Duke Slater, who was African American, led Clinton High School’s football team to the state championship in 1914. He was an All-American player at the University of Iowa and played professionally for a decade after that.

The project to restore the school building where Slater and countless other Clinton residents got their educations cost nearly $5 million.