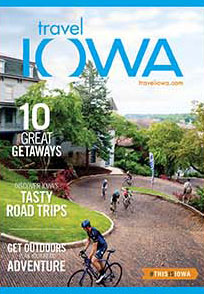 An unusual roadway in the southeast corner of the state will be featured on the cover of next year’s Iowa Travel Guide.

A photo of the Snake Alley Criterium in Burlington was chosen for the cover by followers of the Iowa Tourism Office on Facebook. Jason Hutcheson is president of the Greater Burlington Partnership.

“We are thrilled,” Hutcheson said. “The Iowa Travel Guide reaches visitors from all across the country. Snake Alley is a beautiful gem in our community.” The alley is a steep and curvy brick road that’s listed on the National Registry of Historic Places. It’s billed as the world’s crookedest street.

“Many people know about Lombard Street in San Francisco and it’s more famous than Snake Alley, but if you go by curvature per linear foot, Snake Alley is actually more crooked than Lombard Street,” Hutcheson said. “That’s why we’ve got the title of crookedest street in the world.” The unique road was built in the 1800s in Burlington, a river town with sharp bluffs.

“So, it was very difficult for horses pulling a carriage to go both up and down hill, particularly in the wintertime. So, they built Snake Alley with the curves to help the horses get up the steep bluffs,” Hutcheson said. “It’s a brick road and the bricks are turned on their side so the hooves of the horses would be able to get traction.” The Snake Alley Criterium is bicycle race held annually over the Memorial Day weekend. Cyclists climb the roadway multiple times over the course. Snake Alley is a public street that’s open to traffic 24-7, barring bad weather in the winter.

“It’s a neat tourist attraction. People will often start at the top, they’ll drive down, they’ll park, and then they’ll walk back up and take pictures,” Hutcheson said. The next Iowa Travel Guide will be available in early 2017. Other images for the cover that were under consideration involved a family walking near the Turkey River in Elkader, the Monster roller coaster at Adventureland in Altoona and a family enjoying the Sioux City Art Center in Sioux City.