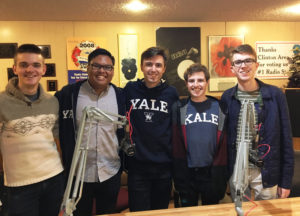 The Yale University all-male acapella group called the Spizzwinks is in eastern Iowa for several performances this weekend.

The 14 members of the group are here because Clinton native and Prince Of Peace School graduate Noah Strausser is a member. Stausser says, “We have a thing called the Spizzwink Promise, where every member of the group has the opportunity to go to all six inhabited continents as well as their hometown during the three years they’re in the group.”

Strausser says it’s fun to visit the hometowns of his friends and fellow singers. “It’s very eye-opening to see everyone’s families and homes and rooms and their best friends growing up,” he says.

While in the various hometowns, the group performs several concerts. “I’d say that some of our best and most meaningful performances have been in people’s hometowns,” he says. The group performed in Washington D.C. on Tuesday and then flew to Clinton for several shows. They’ll be back in class at Yale on Monday.