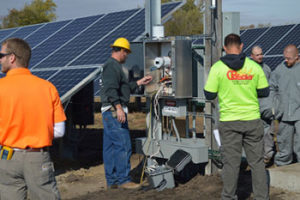 This solar site in Urbana is the first of five to start generating for CIPCO.

That state’s largest solar energy project is on its way to turning the sun’s rays into power.

“It’s producing electricity through the solar system — which is a benefit to all of our members. All five sites will be up and generating through the end of the year,” Koonce says. The first site has some 3,700 solar panels on that site in Urbana, which is within East-Central Iowa REC’s territory. Other sites are in Wilton, Pella Osceola and Marshalltown.

Koonce says the solar power adds to what the coops already produce. She says outside of some purchased wind generation, they generate their own power and she says this will increase their general power capacity to meet new growth.

Koonce says the solar power adds another option to the power they produce. “Customers won’t notice anything as far as their bills, there’s no increase in cost or anything like that. Solar is a very cost-effective utility for us,” Koonce says. “The thing that they can notice is that the generation company that provides their energy will be increasing our ability to provide emission and carbon-free energy, which is something that is very important to a lot of our members.”

Koonce says the solar site will eventually pay for itself in the energy it produces. She says the total cost of the project is about $9 million and is spread out over 20 years to take advantage of some the federal solar tax credits. Koonce says the cost of all five solar sites is significantly less than what it costs to build a new coal-fired electric plant. She says the time of payback is not exactly known.

“It’ll depend on how much electricity actually gets generated through the system each year,” Koonce explains. “On average we are expecting it to generate enough to power over 700 homes. Assuming that, we will have a nice playback well before that 20 years is up.”

CIPCO is Iowa’s largest cooperative energy provider serving 13 electric cooperatives and associations spanning 58 of Iowa’s 99 counties. It’s territory stretches 300 miles diagonally across the state from the Mississippi River on the east to Shenandoah in the southwest.