You are here: Home / News / Horned owls ready to return to wild after car accident recovery 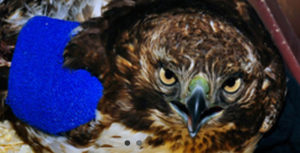 After several months of rehabilitation, two great horned owls will be released at Prairie Rose State Park near Harlan in western Iowa tonight at 6 P.M.

Kay Neumann, executive director of Save Our Avian Resources, or SOAR, says one of the owls had been hit by a car, while the other one had injuries consistent with getting caught in a soccer net.

“They aren’t like us when we go, ‘Oh, we’re stuck in something,’ hold still and figure out how to get yourself out, they will panic,” Neumann says. “They’ll start flapping wings and doing things like that and in a soccer net, it doesn’t take too long and they get entangled.”

At night, soccer fields are wide open hunting grounds where owls snatch mice and other rodents, but the nets can quickly turn predators into victims. Tonight’s release of the owls is a celebration for SOAR, which focuses on rehabilitation, education and research.

“We’re over 350 bird-patients this year,” Neumann says. “We take in injured wild birds, we try to fix whatever’s wrong with them and release them back into the wild. It’s been extremely busy.” In the first few months of this year, Neumann says they took in 13 American bald eagles, all with lead poisoning. Only one of the eagles survived to be released.

The eagles got sick, she says, from eating animals that were shot by hunters who used lead shot as ammunition. She’s campaigning for hunters to use copper shot instead.