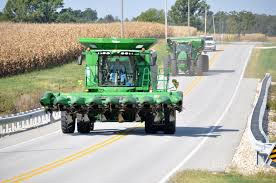 Researchers at the University of Iowa say there would be a dramatic reduction in crashes involving farm vehicles if states adopted policies requiring more lights and reflectors on the equipment.

A study by the school’s Great Plains Center for Agricultural Health looked at regulations in nine Midwestern states where, on average, there are 1,100 farm vehicle-related crashes a year. According to the study, accidents would be cut in half if state policies aligned more closely with industry standards for lighting and marking the machinery.

Corrine Peek-Asa, one of the study’s authors, says responsibility for these accidents should not fall entirely on the farmers.

“It is usually not the operator of the farm equipment at fault,” Peek-Asa says. “More often these crashes are the fault of the other cars on the roadway.” Peek-Asa is a professor of occupational and environmental health at the University of Iowa.

“I think our baseline goal is to catch the attention of rural communities, and especially awareness that rural roadway safety is a shared responsibility,” Peek-Asa says. In Iowa, the study estimates crashes would decrease from an annual average of 164 to 65, or by 60 percent, if the state adopted more stringent lighting and marking policies. The study is published in the current issue of the Journal of Occupational and Environmental Medicine.