You are here: Home / Crime / Courts / Des Moines police ask for help in what appears to be random shooting 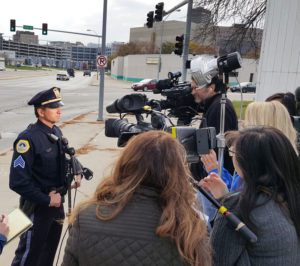 Sgt. Paul Parizek talks with the media about the shooting.

A 14-year-old boy remains in critical condition after he was shot in the head at a busy downtown Des Moines intersection.

It happened around 6 p.m. Monday as the teen was riding in a car with a family member.

Des Moines Police Sergeant Paul Parizek says investigators need help finding the person who fired the shots. “It’s kind of hard to think how busy this intersection is at six o’clock at night that there weren’t other people who saw something that might be helpful to us,” Parizek said. “We don’t think anybody is refusing to come forward, we just don’t think people may’ve understood what was going on at the moment they were passing by.”

Multiple shots were fired, but officers don’t know if the shooter was on foot or in a vehicle. It’s believed the teen was a random victim, but Parizek says he could’ve been targeted.

“We don’t know if the kid was the intended target, if there was gunfire intended for someone else, or if there was gunfire for no good reason…that, unfortunately, happens sometimes,” Parizek said. The gunfire happened in the 1100 block of Keosauqua Way near a bank. A window was shot out at the bank and another bullet lodged in a window frame. Parizek is hoping people who were in the area will help police solve this crime.

“We don’t ever want to create panic, you know, but it is unsettling and people should be worried that there’s some moron running around, shooting a gun off in the middle of the day in the middle of a busy intersection. That should be concerning to people,” Parizek said.

Update:
The teen who was shot has been identified as Yore Thour Jiang. Des Moines School officials said the teen is a freshman at Roosevelt High School.