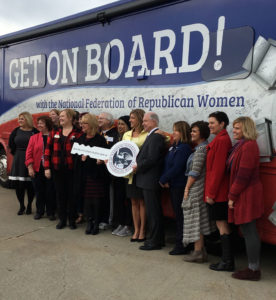 A bus carrying the president of the National Federation of Republican Women is rolling through Iowa.

“We kicked this tour off on Mother’s Day from my driveway in Missouri,” Carrie Almond, the organization’s president, told a small group gathered in Urbandale today.

She’s been to 39 states since May. Almond and her bus stopped at the Republican Party’s “Victory Office” in suburban Des Moines this afternoon. After about a dozen women there signed the bus, Almond told reporters she doesn’t believe the polls that show Donald Trump trailing Hillary Clinton.

“I can even see the difference now, driving down the road. When we first kicked off the tour, we received quite a few middle fingers as we traveled down the road. Right now we receive way more high fives and thumbs up,” Almond said.

“And even in the truck stops…when I used to go in amongst 20 truck drivers with a Trump shirt on, it was a little uncomfortable. Now they’re coming up to me, going: ‘Way to go! Good for you! We’re behind Trump.'”

Almond said she doesn’t know who the pollsters are calling, she just knows the people she’s talking to are optimistic about Trump’s chances of winning.

“And I think it’s pretty unfair to say Trump isn’t doing well with women simply because it isn’t fair to put all women in the same basket,” Almond said. “…Women are certainly capable of thinking for themselves and the women that we have rallied with and we are talking to are looking at the big picture.”

Gwen Ecklund of Denison, president of the Iowa Federation of Republican Women, told reporters  if “trivial” issues are pushed aside, Trump appeals to people who are concerned about “their daily lives and the future of their families.”

“Just the feel I’m getting across the state and it’s pretty exciting,” she said. “I’ve been in Davenport and Cedar Rapids the last couple of days and knocking on doors and getting real positive response in Democrat homes.”

Ecklund just took over as president of the Iowa Federation of Republican Women after the Iowa group’s previous leader resigned over Trump’s controversial comments about women.

Ecklund and Almond will speak this evening at a fundraiser for Polk County Republicans. Alabama Senator Jeff Sessions, an early supporter of Trump, will be there, too. During a brief news conference in Urbandale this afternoon, Sessions said it appears pollsters aren’t including enough Republicans in their surveys.

“Polling data’s important, but really turn-out and intensity of interest is a big factor and people don’t acknowledge, sometimes, that polls move,” Sessions said. “And I think we’re seeing Trump move up and if he can continue to do that until Election Day, he’s going to win this election.”

Sessions said if Trump stays “on message,” he can start motivating voters by focusing on the “dramatic” double-digit premium increases just announced on the “ObamaCare” insurance exchanges.

Kate Waters, the Iowa press secretary for Hillary Clinton’s campaign, issued a written statement, saying Iowans “don’t want a president who calls women ‘fat pigs,’ ‘bimbos,’ and ‘dogs.'” The Clinton campaign also cites its list of more than 200 Iowa women who are part of Clinton’s “Iowa Women Win” coalition, made up of state legislators, local elected officials and the chairwomen of Democratic Parties at the county level.