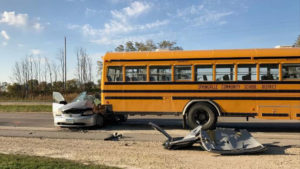 The driver of the car suffered life-threatening injuries in a crash with this school bus near Springville.

A car crashed into a stopped school bus in eastern Iowa Monday afternoon. It happened on U.S. Highway 151 near Springville.

Linn County Sheriff’s deputies say a Springville school bus, with six students on board, was stopped in the northbound lane to drop off a child. A car slammed into the rear of the bus. The woman who was driving the car was taken to the hospital with what deputies described as life-threatening injuries.

One student was hospitalized with apparent minor injuries. Authorities have not yet released the names of the drivers.