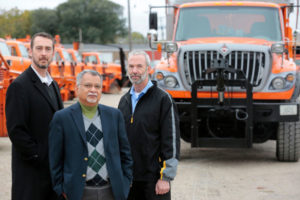 ISU researchers, Kevin Scheibe and Sree Nilakanta along with David May of the Iowa Department of Transportation.

The decision to fix up your old car or buy a new one is something we all face at one time or another.

The Iowa Department of Transportation faces the decision on a much larger scale when it comes to its fleet of big orange snowplow trucks — but they now have some hard data from analysts at Iowa State University to help them out.

ISU associate professor of information systems Kevin Scheibe and his fellow researchers went through 10-years of maintenance records. “We found that given the age of the vehicles and the amount of time and money that it takes to keep them up that there is a point where it is more expensive to keep the aging vehicle than it is to replace it with newer technology,” Schiebe says.

The current DOT schedule calls for replacing trucks every 15 years, but Scheibe says changing that to six or seven years would be cheaper . Scheibe says there are some 900 single and tandem axle trucks used to clear state highways.  “We are highly confident that keeping at least keeping these two classes of vehicles for as long as they have is too long,” Scheibe says, “that if they were to reduce their normal replacement window they would see pretty significant savings.”

Their projections show the DOT could save between 2 and 5 million dollars annually by dropping the replacement time to 6 or 7 years. Scheibe says some of the researched involved the differences in the weather in the state.

“As most Iowans are familiar, it seems that there are weather ranges and there are some years where you might be heavy hit in the north and others in the south,” Scheibe says. “We did do some descriptive analytics on the data to see if perhaps there were some areas that had greater costs — and we found the equipment usage was fairly evenly distributed. We didn’t see any major spikes.” Scheibe worked Sree Nilakanta to comb through the data and he says they’ve been hearing from organizations in other states who are interested in what they’ve found in Iowa. Scheibe says the analytics they use have been around for some time, but now they have more information to plug into them.

“Modern organizations are collecting phenomenal amounts of data because data storage is so inexpensive and data collection is now very easy,” Scheibe explains. “So now we have very rich data — in fact at times it’s overwhelming — we don’t actually have the capability of analyzing such massive amounts. So, what we are seeing is a resurgence now in many of these analytic techniques with this influx of massive amounts of data.” He says one of the things that’s pleasing in this research is talking with the DOT crews and being able to confirm some of the things they thought about repairs costing more than replacing trucks.

“So it’s taking anecdotal ideas and now we are able to empirically verify them,” Scheibe says. David May has been the fleet manager for the DOT for almost 20 years. He says they do most of their own repairs and is happy to see the ISU research.

“I’ve always known that we were keeping our trucks longer than we should have,” May says, “the work done by Iowa State University has substantiated that and has given us the ammunition that we need to move forward and make a change in terms how long we plan to keep our snowplow trucks.” But it’s not a matter of backing the big orange trucks out of the maintenance garaged and driving over to pick up new ones. May says they plan to make a gradual change to start.

“Right now our replacement standard is 15 and we are moving to 12. And I don’t regard that as a final destination, but rather as a new goal to aim towards,” May says. He says it will take some additional money to make the change and they are preparing proposal on the funding. The trucks can cost as much as some people’s homes,  as May says the larger more expensive trucks run nearly $200,000 each.

The ISU researchers have given the analytic tool they used to the DOT so the organization can continue monitoring the cost of operating the fleet when compared with buying new.