You are here: Home / Sports / Coe on the brink of IIAC title and playoff bid 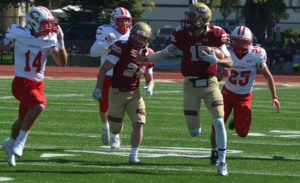 Coe coach Tyler Staker says the approach of just concentrating on the next opponent has worked so far and it is not changing as they head into their home finale. The Kohawks are 8-0 and with a victory over Buena Vista on Saturday would clinch at least a share of the Iowa Conference championship and the league’s automatic spot in the NCAA Division III playoffs.

Staker has not even addressed the possibilities with his team.

“The kids know what is at stake and they know what they are playing for”, said Staker. “This has just been our approach all year long and that doesn’t change for us. Yes, there is a little more riding on it if we win but to us it is just week nine.”

Coe is led by senior running back Trevor Heitland. The former Cedar Rapids Kennedy standout leads all of Division III in rushing with 1,297 yards. Buena Vista is 2-5 but the Beavers have won two of their last three games.

“We know we are going to be in a dog fight against Buena Vista”, added Staker. They are playing great ball so our guys are prepared to go four quarters.”