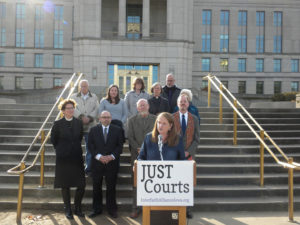 Connie Ryan and other members of the Interfaith Alliance of Iowa.

Members of the Interfaith Alliance of Iowa gathered on the steps of the Iowa Judicial Building today to urge support for the retention of three state supreme court judges on the bench now who were involved in the 2009 decision which overturned Iowa’s law banning gay marriage.

Alliance executive director, Connie Ryan, says other faith groups are wrongly using religion in an effort to vote out the judges.

“Iowa’s courts faced attacks from religious extremists in 2010 and 2012 and now they are back once again, seeking revenge against three respected supreme court justices, inserting politics into what is designed to be a nonpartisan retention election,” Ryan says.

Three Iowa Supreme Court justices who were part of the 2009 decision were voted off the bench in the 2010 retention election. Reverend David Sickelka was one of four other religious leaders to speak. He says those who want to see the judges voted out this time are using the same arguments used after the 2009 decision.

“Among those who were unhappy with the decision I often heard the phrase ‘let the people vote’ as if the rights of the minority were dependent on the largess of the majority who could grant or withhold those rights depending on their mood or the ability of politicians to rally the opposition,” Sickelka says. ” And now we are on the brink of a fear driven campaign to try to convince Iowans that our supreme court is activist or irresponsible –exercising powers that are not theirs — when in fact the opposite is true.” Sickelka says the gay marriage opinion has held up over time.

“The fact that any of us might disagree with the decision is no basis for ousting the judges that made it. It is our state’s constitution that is the guide — not someone’s political views — and certainly not someone’s religious views,” Sickelka. Ryan says they are pleased that the opposition to the judges seems to be less this time around than it has been in the past, but they do not want to let down in their support of the judges. Ryan was asked why her religious group’s views on the issue should override those of others who believe differently. She says people should look at the history of the Iowa court system in determining their votes on retaining judges.

“There was not politics as part of the retention election until the religious extremists inserted that in 2010. And we would like to go back to the way of making sure that partisan politics does not have a place in retention elections,” according to Ryan.

Voting out the Supreme Court Justices was briefly mentioned in September at the Iowa Faith and Freedom Coalition’s fall banquet. Iowa voters are asked to vote on whether a judge or justice should remain on the bench at the end of each judge’s term.

The three Iowa Supreme Court judges are on the November retention ballot along with 63 other judges across the state.