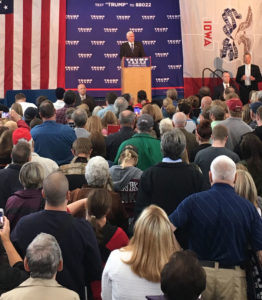 Republican vice presidential nominee Mike Pence delivered a plea for party unity to a crowd of about 300 people gathered for a campaign rally on the Iowa Central Community College campus in Fort Dodge this afternoon.

Pence’s comments came as a new Quinnipiac University poll was released showing Donald Trump and Hillary Clinton are virtually tied in Iowa. Pence didn’t mention the new Iowa survey, but instead pointed to national polls and jabbed at the idea there’s an “air of inevitability” about Clinton winning the presidency.

“It’s wheel-to-wheel all across the country. Don’t ever doubt it for one second. The race is on and we’re going to race all the way to the checkered flag,” Pence said, to cheers. “You know she may have the media and the money and the special interests on her side, but Donald Trump and I have got a little bit more. We’ve got a basket of the American people that are saying: ‘Enough is enough.'”

According to Pence, the election’s about “big stuff” and nothing’s bigger than the future of the U.S. Supreme Court.

“Iowa, you need to decide here and now that in the next 12 days you’re going to do everything in your power to make sure that the next president to make appointments to the Supreme Court is President Donald Trump,” Pence said, to cheers.

Pence spoke for about 40 minutes. He cited the address of the local election office where people may vote early and Pence closed by urging the crowd to “be confident.”

“Go tell somebody, especially some of our Republican friends and, lastly, have faith,” Pence said. “Have a spring in your step.”

Eric Branstad, the governor’s son who’s also state director of the Trump-Pence campaign, started the rally with an identical message, that it’s time for Republicans to “come home” and defeat ‘Crooked Hillary’ Clinton.

“Come on!” Branstad said, as the audience cheered. “As a united force, the GOP and our base will absolutely defeat the left-wing gang of Hillary Clinton, media and elites.”

Pence spoke briefly with Radio Iowa after the rally and he returned to the theme of party unity.

“We’re in the final stage of the campaign and people who are committed to real change in this country, to rebuilding our military, to reviving our economy through tax relief (and) tax reform, people that are committed to seeing justices appointed to the supreme court that will uphold our constitutional liberties all need to come together,” Pence said.

Pence had a delayed departure from Iowa due to rainy weather at his next destination. He briefly mentioned his campaign schedule during his remarks in Fort Dodge.

“They’ll fling me back on that airplane. I’m headed east,” Pence said. “Miles to go before I sleep, as the poet says.”

Tonight, Pence’s campaign plane made a hard landing and slid off the runway in New York. No one was injured. NBC’s Vaughn Hillyard, who is among the media covering Pence daily, reports the campaign plane also took a hard and large bounce when it landed in Fort Dodge.

(This story was updated at 10pm with additional information)