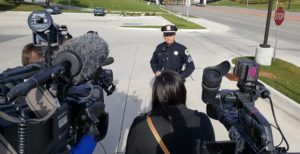 A teenager is fighting for his life while Des Moines Police are working around the clock to find the person who fired the gun that struck the boy in the head. The shooting happened Tuesday, just after 6 p.m., at a busy downtown Des Moines intersection.

Fourteen-year-old Yore Thour Jiang was hit by the gunfire as he was riding in a car with a relative. Des Moines Police Sergeant Paul Parizek says investigators have not yet identified a suspect. “We don’t have any expectations right now that the person who is responsible for this is going to contact us,” Parizek said. “Unfortunately, we’re dealing with another pretty cowardly act and we’re pretty certain this person is going to hide from us and we’re going to have to go find them.”

Police do not believe Jiang was the intended target. The boy remains hospitalized in critical condition.

Parizek is hoping the driver of a silver Toyota Prius, shown on surveillance video from a nearby business, will get in touch with police. “As that Prius sat there, it was beginning to make a turn and it was cut off by an erratic driver. It was so close that it was nearly a collision. We’re pretty confident that witness in the Prius might be able to give us some information about the driver of the car that was being operated erratically,” Parizek said.

The driver of the “erratic” car may or may not have been involved in the shooting. “We don’t have anything right now that indicates that the suspect was in that car,” Parizek said. “They just stood out because of their driving habits. It may be nothing, but it may be something.”

Jiang is a freshman at Des Moines Roosevelt High School. The Des Moines Register reports his parents, both Sudanese refugees, moved to Des Moines in 2002.