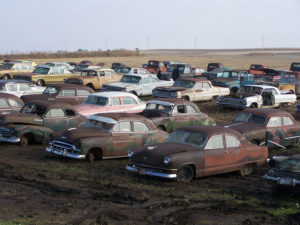 An auction is underway today in Le Mars that includes more than 150 vintage automobiles. The vehicles, which range in model years from

the 1940’s to the 1970’s, are a collection obtained by Kellen Excavating of Le Mars when it bought the estate of Brett Conley. Derek Kellen says Conley

was once a mechanic, and started the antique car collection. Kellen says there’s been a lot of interest in the auction.

“The last three days my phone has been blowing, it’s been non-stop ringing with calls. The last couple of months I’ve had about four calls, five calls a day,” Kellen says. He says he’s been told people from Kentucky to Texas had signed up to bid in the online auction and there are others from across the U.S. 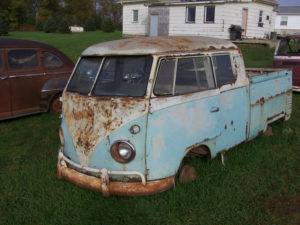 According to Kellen, the antique auto collection has several unique vehicles,some of which are very rare, including a special Volkswagen pickup. He says it’s a 1950’s era three-door split window pickup that had three doors and is rare. There are some other well known vehicles in the sale.

Kellen says there’s a Studebaker pickup and a Studenbaker four-door sedan and some Kaisers. There’s also several of the more common brand Chevy, Ford, GMC and International trucks. Kellen admits for many of the vehicles to be sold will be challenging for collectors to restore.

“They’ve been sitting since the 80s so the engines are locked up, they’re pretty rusty. Most of these cars are going to go for parts probably only,” Kellen says. “A few people are talking about restoring them — I think it would take a lot of time and effort to do that.” Kellen says they will have live bidding along with the on-line bidding.