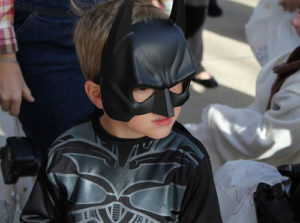 While many Iowans plan to don a Donald Trump or Hillary Clinton mask at this weekend’s costume parties, those aren’t the most popular disguises at one of the state’s biggest costume stores.

Kathy Harkrader, at the Theatrical Shop in West Des Moines, says a cloaked crusader is this Halloween’s super-seller.

“You know who takes the top slot and he’s done it for several years now,” Harkrader says, “is Batman himself.” Harkrader says Superman, Spiderman and Wonder Woman costumes are also moving quickly this season, as are several of the Star Wars characters.

She says, “There’s been so many superhero movies out and that normally sets the trends for costumes for what’s popular for adults and kids both.” For trick-or-treaters who want to make a political statement, the store is selling plenty of rubber masks that resemble the two main party presidential candidates, but one of them is edging ahead, at least in terms of sales.

“We have lots of customers coming in looking for the masks or the wigs or Donald Trump’s hat, the red-billed hat,” she says. “By our standards here, just by looking at the merchandise, Hillary is ahead.” Harkrader says other Halloween favorites this year are more traditional, including: Dracula, Frankenstein and witches.