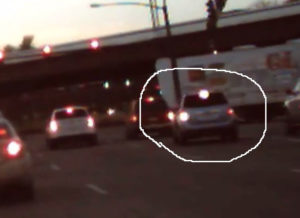 A 14-year-old Des Moines boy died over the weekend, five days after being shot in the head while he was riding in a car driven by his sister.

Detectives say someone outside of the car fired the gun and there’s no evidence Yore Thour Jieng did anything to provoke the shooting.

Des Moines Police Sergeant Paul Parizek says they now have video of a silver Chevy Equinox that was “driving erratically” in the area shortly after the shooting.

“We don’t know if this is a suspect vehicle, we don’t know if it may be a victim who was fleeing from the gunfire…but, we do want to put this out and see if we can get some information coming in. It is a critical piece to our investigation,” Parizek said. The shooting happened at a busy downtown Des Moines intersection shortly after 6 p.m. on October 24. In the video, the Equinox appears to NOT have license plates. Parizek is hoping someone who has information about the silver Chevy Equinox will contact police.

“It’s just a matter of it’s a big puzzle, we’ve got a lot of little pieces we’re trying to put together, this is the piece we’re missing and we consider it pretty critical,” Parizek said. The video shows the driver of the Equinox cutting off another motorist while driving away from the shooting scene. The case is similar to another unsolved murder in Des Moines on September 3. Sixty-one-year-old Barbara Perry died after being struck by a stray bullet while sitting in a parked car outside a Family Dollar store.

“You’ve got some idiots running around town, acting like this is some movie, shooting out the window, a bunch of thugs…not caring who gets caught in the crossfire, not caring what happens to the people on the other end of that gun or where that bullet lands,” Parizek said. “That’s the frustrating part for us.”