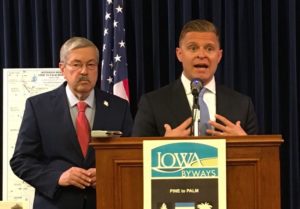 State officials will pay the three private companies that manage care for Iowa Medicaid patients $33 million more than was outlined in the original contract. Governor Branstad says the extra money will cover the rising costs of prescription drugs.

“The agreement that we had provided that we would make adjustments based on those costs,” Branstad says, “so this is just something that’s done in the normal course of business.”

“We’ve had (fewer) people enrolled in higher cost programs than we did in years past,” he says. “…However our partner plans were experiencing higher than anticipated costs around pharmaceutical drugs.”

The roughly $33 million in savings above the original savings estimate is going back to the three private companies, to cover escalating costs for prescription medications. The drugs to treat hepatitis C, for instance, now cost $80,000.

Democrats in the Iowa Senate are criticizing Branstad’s administration for “handing over even more tax dollars” to the out-of-state companies managing care for Iowa Medicaid patients. Branstad says Democrats are “playing politics.”

Senator Joe Bolkcom, a Democrat from Iowa City, says “privatized Medicaid” has reduced the quality of services provided and increased the financial strain on the state’s health care system.