You are here: Home / News / New byways for travelers through Iowa, to promote tourism 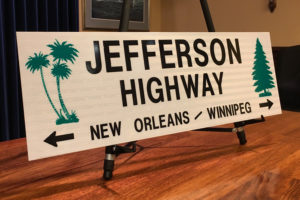 From palms to pines, a sign for historic highway

Three stretches of what could be considered “roads less traveled” in Iowa are now part of a state program that promotes tourism.

“The link between transportation and tourism is essential, allowing citizens and visitors alike to enjoy the unique offerings of this great state,” Trombino says.

The historic “Jefferson Highway” runs from Winnipeg to New Orleans. The 2300 miles along Highways 65 and 69 –between Northwood and Lamoni, Iowa — are now an official “historic byway.” Loring Miller of Leon, a booster of the project, says the Jefferson Highway was the brain child of Des Moines-based publisher Edwin Meredith back in 1915. 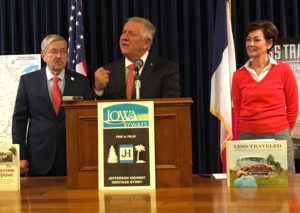 “Construction started in 1916,” Miller says. “By 1919 over 15,000 stenciled pole markers and 2000 enameled steel signs posted at mile intervals were placed on the route to guide motorists.”

The second new state byway is an 82-mile route that will originate in Winterset. The DOT’s director says it will guide travelers to the John Wayne birthplace and Madison County’s iconic covered bridges.

“Instead of a loop, like many other routes in the state, the ‘Bridges Byway’ is laid out like spokes of a wheel,” Trombino says, “with each spoke reaching one of the bridges.”

The third new “byway” is known as the “White Pole Road.” It runs 26 miles, between Adair and Dexter, just north of Interstate 80 along old U.S. Highway 6.

“The route had a historic claim to fame linking five small towns and highlights infamous events from outlaws such as Jesse James and Bonnie and Clyde,” Trombino says.

Trombino expects the signage and promotional materials for these new byway routes will be ready for the 2017 tourism season.

Three already-existing state “byways” have been selected for upgrades. The “Driftless Area Scenic Byway” in the Decorah area will be extended by 44 miles. The Historic Hills Scenic Byway will be extended from Moravia to Honey Creek State Park, a distance of about seven miles. Finally, the “Iowa Great River Road National Scenic Byway” that runs along the Mississippi River will get upgrades. The changes will improve access to amenities along the riverfront and address safety concerns along the route.