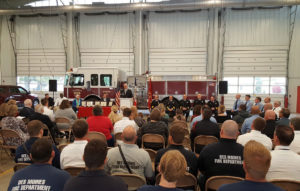 Five Des Moines firefighters were given the department’s Medal of Honor.

Five firefighters were recognized at a ceremony Monday for saving the life of a Des Moines woman.
Audio: Pat Curtis report.  :49

The firefighters were sent to a house fire on November 27, 2015 and learned, while en route, a person was trapped inside. Stephen Kiburz helped pull Carolyn Sharp out of the home.

“We found the victim laying on the ground near the door where the fire was at,” Kiburz said. “We immediately picked her up and carried her out the door.” 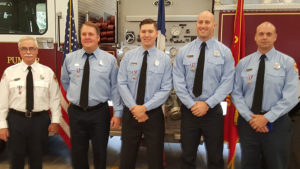 Sharp was hospitalized in critical condition, but has since recovered from her injuries. Kiburz and four other firefighters were presented with Medals of Honor for their actions.

“She was unresponsive, limp, and it did not look good,” Pavelka said. “I knew it was a life threatening situation. I’m glad we were able to get there when we did and get her out in a timely fashion.”

The three other award recipients are Captain Doug Burke, firefighter John Roehrick, and medic Keith Maki. The cause of the fire remains under investigation.