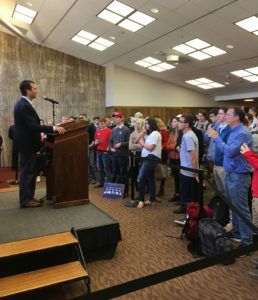 Donald Trump, Junior, spoke to about 100 Iowa State University students late this morning, touting term limits for politicians and casting his father as a change agent who would remake the federal government.

“Because of the promises that our politicans have made — most of them lies, very few of them actually executed on — it’s going to be your generation that’s going to be stuck with that burden,” he said.

Trump is 38, the oldest son of the Republican presidential nominee. He got cheers for using the Trump campaign rallying cry of “drain the swamp.” He blasted both liberals and conservatives in Washington for making “trillion dollar decisions” that have made a “mess” of the federal government. 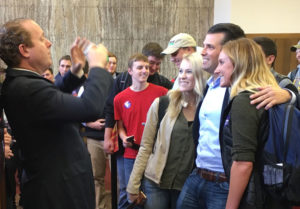 Trump has been visiting college campuses, to encourage millennials to vote for his father. Maureen Duggan, an ISU junior studying event management, took a selfie with the candidate’s son. She has already voted.

“I voted for Donald Trump, of course,” she said. “He’s just unconventional. It’s something different, something we need and I couldn’t vote for Hillary. Couldn’t do it. Would have been sick to my stomach.” 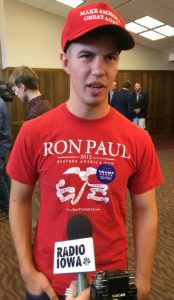 Twenty-three-year-old of Michael Tallon of Mondamin is a senior architecture student at ISU. He wore his red Ron Paul t-shirt and red “Make America Great Again” hat to today’s event.

“It’s nice to have a candidate that the media can no longer ignore,” Tallon said. “Now they’re coming after him hard core because they know that, like, they can’t ignore this guy and push him off to the side like they did with Ron Paul.”

Donald Trump, Junior, also blasted the media and urged the crowd to seize a “once-in-a-life” chance to elect an outsider as president.

Trump concluded by asking the students if they wanted to take some selfies, then he reminded the crowd to vote as he stepped off the stage. Trump is scheduled to hold a similar event later today on the University of Northern Iowa campus in Cedar Falls.

“Millennials are voting early in droves for Hillary Clinton because she is the only candidate who has a plan to make college more affordable and build an economy that works for everyone, not just those at the top,” Kate Waters, Clinton’s Iowa campaign press secretary, said in a written statement. “Millennials also reject Donald Trump because his hateful rhetoric and dangerous ideas have divided the country.”

Former President Bill Clinton and Democratic vice presidential nominee Tim Kaine will be in Iowa tomorrow to hold get-out-the-vote events for the Clinton campaign. Bill Clinton will make solo stops in Sioux City and Waterloo, then the former president and Kaine will be joined by musician Ben Harper for an evening event at the Des Moines Social Club.