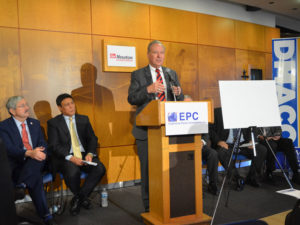 Reza Kargarzadeh, the President and Founder of Engineered Plastics Components Incorporated, is donating the former Maytag Campus buildings he acquired five years ago to DMACC.

School president Rob Denson says there are seven buildings with 480,000 square feet and an appraised value of nine million dollars. Denson says DMACC will work with the city and the state to fill the buildings with new programs and employers.

“As we look to bring in businesses and other entities that can work with our students — what a great setting when students can come to a campus like this — be able to have a great education and also to have paid internships in an area where they are studying. And in this era of high student debt, be able to have a quality education with a minimal amount of debt, with a high level of skill development,” Denson says.

The seven buildings consist of office, meeting, and manufacturing space. Since buying them, Kargarzadeh has moved his plastic injection molding company’s headquarters to the campus, and rented out space to two other businesses. His own business has also expanded to 15 locations. It’s that growth, and his desire to help Newton and Iowa economically, that prompted this historic donation.

He says his injection molding business has grown so fast that it takes up all of his time. Kargarzadeh says he talked with Denson at DMACC about the president’s vision to bridge the education and businesses together to help the entire state of Iowa to grow. Denson says the current businesses will stay. He also anticipates the college will unveil potential new programs that will be housed in these buildings…in the coming months. Other potential uses include student housing, and a business incubator for start-up companies.
Newton Development Corporation hosted the news conference in the former Maytag Innovation Center. NDC Executive Director Frank Liebl says going forward, city leaders and DMACC have a single goal.

“And that’s to bring this campus alive again. At one time 2,000 people worked out of these buildings. Our long-term goals is make that 2,000 and one,” Liebl says. “Together we can do that — whether they’re being educated here or working here.” The courtyard between a number of the buildings will be named Kargarzadeh Court in honor of his donation.