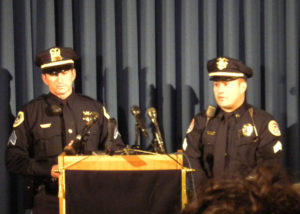 Des Moines Police say the suspect in the early morning slaying of two central Iowa policemen was walking on a rural road and flagged down a passing state employee to turn himself in.

The suspect is Scott Michael Greene, a 46-year-old from the Des Moines suburb of Urbandale, where the first shooting happened around 1 a.m. A spokesman for Des Moines police says Greene approached a Department of Natural Resources officer on a gravel road near Interstate 80, south of Redfield. Greene showed the officer his ID and asked the DNR officer to call 9-1-1.

Dallas County deputies and Iowa State Patrol officers raced to the scene and Greene peacefully surrendered at about 9 a.m. Greene complained of a “flare up” of a previous medical condition, according to Des Moines police, and he was taken to a Des Moines hospital “as a precaution.”

“He’ll be interviewed once he’s well enough to make a statement,” according to Des Moines Police Sergeant Paul Parizek.

Parizek spoke with the media at 11 o’clock this morning and released the names of the slain officers. Sergeant Justin Martin, the first officer killed this morning, began training to be an Urbandale Police Officer last year and became a patrolman this past August. He’s a native of Rockwell City. Sergeant Anthony “Tony” Beminio was the other officer killed. He’s been with the Des Moines Police Department since 2005.

Parizek, the public information officer for Des Moines Police, was asked about a YouTube video which appears to show Greene complaining about being kicked out of an Urbandale High School football game last month.

“We’re not going to talk about it now,” Parizek said of the video. “We don’t know if it’s relevant…We don’t have time right now to take a look at it…We can’t confirm that’s Mr. Greene.”

Police are searching for the weapon or weapons used in the slayings. Greene has not been charged, but is described as the lone suspect in the case.

Greene had been warned to stay off Urbandale High School and advised he’d be charged with trespassing if he returned. Greene and his mother were in a dispute and made an appearance in court yesterday, but the police chief does not know the outcome of that hearing.

Urbandale’s police chief said Greene waved a confederate flag “in front of people of color” as the National Anthem was played at a recent Urbandale High School football game.