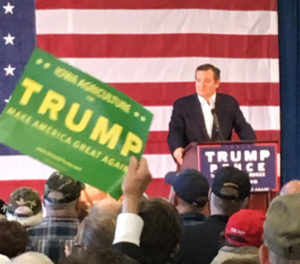 Republican vice presidential candidate Mike Pence has a campaign partner today who is familiar to Republican activists in the state.

“God bless the great state of Iowa!” Texas Senator Ted Cruz, the victor in Iowa’s Caucuses 10 months ago, said as he took the stage near Prole, Iowa, early this afternoon.

Cruz introduced Pence at a campaign rally staged inside a massive machine shed on a farm about a half hour’s drive south of Des Moines.

“This election has been a wild ride,” Cruz said. “It has been something else and we are coming down to the closing stretch and I’ll tell you, the stakes have never been higher for our country.” 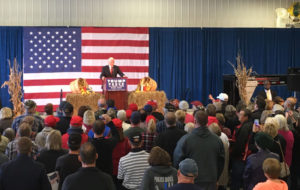 Cruz urged the crowd of about 325 to “throw the bums out” who pushed “ObamaCare” through congress. He drew lengthy cheers and chants of “Lock her up” for joining Donald Trump’s call for a special prosecutor to investigate Hillary Clinton.

“There are a lot of politicians that have problems with the truth and even among those Hillary Clinton stands out,” Cruz said, to laughter.

Cruz stressed the importance of electing a Republican president, but Cruz never said Donald Trump’s name. Cruz called Pence a friend and Pence returned the favor when he took the stage. Pence delivered the same upbeat message he’s been stressing at campaign events in Iowa over the past few months. 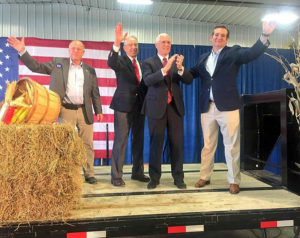 But Pence also peppered his remarks by blasting the media as well as Bill and Hillary Clinton.

“I think the American people have had enough and they’ve especially had enough of the fast and loose ethics of the Clintons for the last 30 years,” Pence said and the crowd started chanting, “Lock her up!” again.

AUDIO of Cruz, then Pence speaking in Prole

Pence said Clinton had been over-confident in October and had been “measuring the curtains in the Oval Office.”

“Since you’re here, I assume you’re interested,” Clinton said. “And if you have not voted, you can vote at the Long Lines Community Center, which I hope is well-named in this election.”

Clinton closed by expressing the hope that Iowa voters would give his wife the “keys to the truck” so she can move the country forward.