You are here: Home / Fires/Accidents/Disasters / Semi driver killed in accident with another truck in Cass County 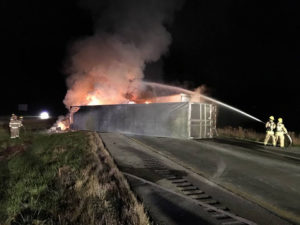 One person died in this accident in Cass County.

One person was killed, another hurt, when two semis collided in southwestern Iowa’s Cass County this morning.

The crash happened at around 5:30 A.M. on Interstate 80, just east of the Atlantic exit. According to initial reports from authorities at the scene, one semi was either partially in the ditch and the shoulder of the road, or in the median when it was struck by a second semi.

The cabs of both trucks erupted into flames. One driver was able to get out of his truck. They were transported to the hospital in Atlantic. The other was trapped in the burning semi.

No names have been released, pending notification of family. Fire crews remained on the scene until 9:15 A.M. Eastbound I-80 traffic was being rerouted south on Highway 71 to Highway 83, east through Anita and back to the Interstate near the Adair Exit.