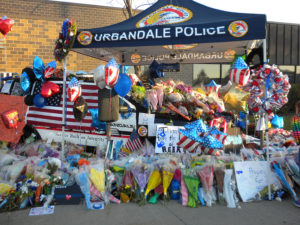 The funeral arrangements are now set for the two central Iowa police officers who were killed Wednesday.

The funeral for Des Moines Sergeant Tony Beminio is set for Monday at 11 a.m. at the Lutheran Church of Hope in West Des Moines. Visitation is Sunday from 2 to 5 p.m. at the church.

The funeral for Urbandale officer Justin Martin will be in his hometown of Rockwell City on Tuesday at 11:40 a.m. the South Calhoun Middle School. Visitation is Monday from 4 to 8 p.m. at the school. 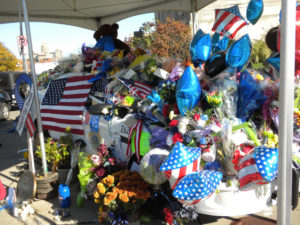 Governor Terry Branstad has ordered all flags on state buildings to be lowered to half staff from Monday morning through Tuesday to honor the fallen officers.

There has been a constant stream of people to the memorials set up to honor the officers at the Des Moines and Urbandale police departments since the news of the ambush style killings on Wednesday. Police cars at each location are covered in flowers, balloons, and messages from people looking to show their support.

Urbandale police spokesman Chad Underwood says members of the department are not surprised by the community response.

“We have a lot of events with our community and we see an outpouring of support from out community with all the events we do. It doesn’t surprise us, but it is gratifying,” Underwood says. He says everyone in the organization appreciates the way those in Urbandale and surrounding cities have responded.

“Yes, just a heartfelt thank you — it means a lot to all the women and men at the Urbandale Police 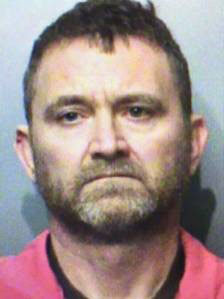 Department as well as our community when they see the support from the fellow neighbors,” Underwood says. “It’s just a genuine thank you to everyone for being so supportive for what we are going through.”

Officer Martin’s death is the first time the Urbandale department has lost an officer in the line of duty. The spokesman for the Des Moines Police department has echoed Underwood’s comments, saying the support from the community has been overwhelming following the death of Sergeant Beminio.

The man accused of killing the two officers, 46-year-old Scott Michael Greene of Urbandale was charged Thursday with two counts of first-degree murder. He is being held on a 10 million dollar bond.