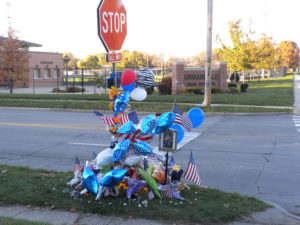 A memorial at the intersection near Urbandale High School where officer Justin Martin was killed.

Urbandale officer Justin Martin was shot to death in an intersection near the high school, and Des Moines officer Tony Beminio was shot a few miles away. High School principal Brian Coppess says the staff held a meeting Thursday morning to plan on how they would handle the situation. 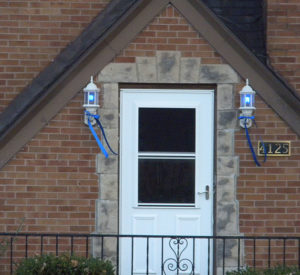 Blue lights and ribbons on an Urbandale home showing support for police.

“We had a great talk and just kind of tried to get a sense of how they were feeling about it all and remind them of their responsibility and that the kids in this community really look to us to lead and to get the students back where they need to be if they need a little support. So, that is what we talked about,” according to Coppess.

Coppess says they adjusted the schedule to talk with students first thing when the day started. “We read a prepared statement…and then we just opened it up, each staff member opened it up to have conversations with kids and tried to help them understand that we are safe here and things came up, and that mostly this was more of a police issue than a school issue. And that we want to move forward and support our police,” Coppess says.

One of the students is a child of the man charged with murdering the police officers. Coppess didn’t want to go into detail about the exact way they handled that, but says they are doing what they can to support the student.”We’ve taken steps and done the appropriate thing to make sure that that part of our experience goes well,” Coppess says.

The district has an emergency management plan in place and Coppess says he got compliments on the way the district communicated things with parents. He says he’s emailed parents two or three times each of the last couple of days and says he always asks them to get back to him if they have questions, and he is able to answer the questions as they come up.

Coppess says the district and the police department have always worked well together. “Urbandale police are at a lot of our events. If there is a need to call them ever, they’re prompt and of course we have our school resource officer right here on site. He makes great relationships with kids it’s an outstanding relationship,” Coppess says. He says he is pleased with the way students reached out and supported the school resource officers once classes resumed Thursday.

The Urbandale Middle School and two other elementary schools are also close to the area where the officer was shot, which is a reason classes were canceled at all Urbandale schools Wednesday.