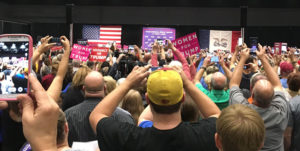 Donald Trump made a personal appeal to Iowa’s blue-collar and conservative voters during his final visit to Iowa before Tuesday’s voting.

“You are the people that built our country and we are going to give you the respect that you deserve,” Trump said.

Trump spoke for a little over half an hour to a crowd of about 4500 in Sioux City. 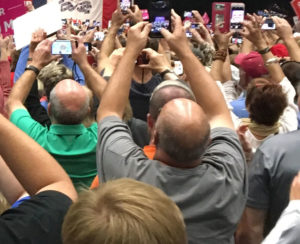 “The political and media elite have no idea what it’s like to be living on a paycheck, paycheck-to-paycheck basis, not knowing whether or not the owners and leaders of their company are negotiating to move their company to Mexico or some other country,” Trump said. “…It’s not going to happen with us, folks.”

“We really weren’t supposed to be here,” Trump said as he took the stage. “We weren’t going to come back to Iowa. They said: ‘Mr. Trump, you don’t have to. You’re leading by so much.’ I said: ‘What do you mean we don’t have to? I want to go to Iowa,’ which is true.”

“Over 600,00 doors have been knocked on. Over 500,000 calls have been made,” Vilsack said. “There’s been a real emphasis on early voting and the numbers are significantly higher than they were in 2012 for early voting and 2014, so there’s an indication, I think, that the ground game is working.”

“Mr. Trump scares the rest of the world and not in a good way. If you’ve got a guy who gets torqued off about an SNL skit and starts a Twitter storm, you can only imagine what his impact will be when world leaders start to criticize what he’s doing. We can’t afford that,” Vilsack said. “…I’ve never been concerned about my country’s future in an election like I am today. This country cannot elect Donald Trump. He has no idea the magnitude of this job.”

In Sioux City Sunday, Trump started his speech by thanking Iowa’s top Republicans — including Governor Terry Branstad and Senator Joni Ernst — for backing his candidacy. Then Trump seemed to suggest Ernst had turned down the chance to be his running mate.

“She was on a very shoirt list and she loves the people of Iowa,” Trump said. “…It wasn’t me. She felt she needed a little more seasoning, maybe, and I said: ‘Isn’t that refreshing when you hear that from somebody?'”

Ernst praised Trump as a leader who has given “voice to millions of Americans.”

“We can talk all day, but we need to translate that into action,” Ernst said during remarks to the crowd before Trump arrived. “That means going to the ballot box.”

Lieutenant Governor Kim Reynolds told the crowd Trump and his supporters will “take Iowa to the next level and take our country back.”