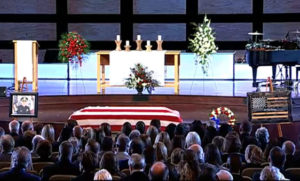 The 38-year-old Beminio was shot as he responded to the shooting death of Urbandale officer Justin Martin.

Des Moines Police Chief Dana Wingert opened his eulogy expressing his condolences to the family and then talked about the community reaction since learning of the deaths of the officers. 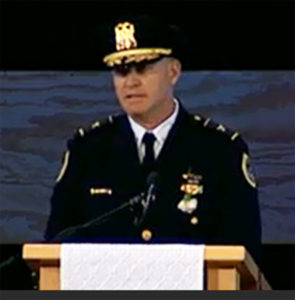 “The outpouring of support has been overwhelming. You’ve been our rock during this difficult time and you’ve stood beside us, so much that at times it’s difficult to determine who is serving who,” Wingert said.

The two officers were shot to death in what has been described as an ambush.

“The community has risen up and declared that what happened was horrific and unacceptable and will not be tolerated. This does not define central Iowa. This is not who we are,” Wingert said. “I would ask that you remain committed to this spirit, this mindset of continued support as we move forward. We are all in this together. This is our community.” The chief paused at times to gain his composure as he described Beminio as a “go-to guy” who wasn’t just good at his job, but great at it. 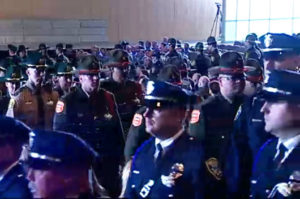 Officers filed by Sgt. Beminio’s casket to salute him prior to the funeral.

“If God could handcraft the perfect police officer, inside and out, it would look just like Tony,” the chief said. “Command presence oozed from his pores, but his size and strength were just a small part of who he was. He was intelligent, organized, creative and detailed.”

And his boss said Beminio’s presence as an officer inside Des Moines Roosevelt High School helped countless students become more focused and succeed both inside and outside the classroom.

Wingert told a story about another officer who was working the overnight shift when a horrible accident happened. That officer called Tony Beminio to tell him he had seen enough tragedy and was ready to quit.

“Being the epitome of a strategist he waited. He waited for the perfect time and then he chimed in with this:  ‘You are not a quitter. You didn’t raise a quitter. This is what we do. And if we don’t do it, who else will do it,'” Wingert said. The chief revealed the other officer was Tony Beminio’s father, Frank, who stayed on the job after talking with his son and eventually became the police chief of Belmond. Wingert said this is one of many stories of how Beminio helped other officers. 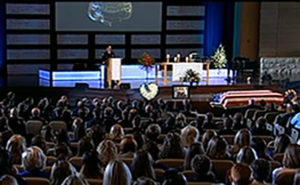 “You see Tony just didn’t just cheer for the underdog. He lifted them up,” the chief explained. “If someone was struggling, he helped them out. If they stumbled, he lifted them back up, put them on their feet. It wasn’t necessarily his job or his place. He did it because he was Tony.”

“He was a proud husband and a proud father. Tony loved Zoe and he loves you kids. He was quick to share all the stories — every trip, every date, every basket, every base hit, every game of punch out, every vacation. If you ran into Tony more than once every day, you probably got to hear the same stories again.” Wingert told Beminio’s family they will not be alone from now on and the Des Moines Police force as well as everyone at the service will help them “shoulder the sorrow.”

“Their presence here is a symbol that no one should ever have to go through this alone and their commitment is that no one every will. That’s why they came. It’s truly something special,” Wingert said. “And the man before us deserves every bit of it.” Wingert’s voice cracked as he closed his remarks.

“God sent Sergeant Anthony Beminio and we’re all better for it and now his time of service is ended and God has called him home. I am absolutely heartbroken. God bless Tony Beminio,” Wingert said, closing the papers that contained his remarks as the crowd began to applaud. The service closed with the end of watch dispatch call.

“Sergeant Anthony Beminio went 10-42 for the last time on November 2nd 2016. Sergeant Beminio, your brothers and sisters in blue will forever watch over you family. May you ever rest in eternal peace.”

The thousands of officers from across the state and country escorted Beminio’s body to a Des Moines cemetery in a procession that stretched for miles. The funeral for Urbandale Officer Justin Martin is tomorrow at 11:40 a.m. in his hometown of Rockwell City. Martin’s badge number was 1140.