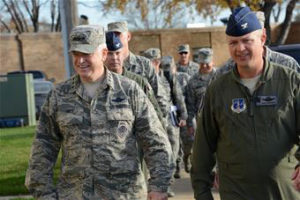 He says there are 90 wings in the Air National Guard from Guam to California and he is trying to see two units each month in the four years he holds his position to see how they operate. General Rice says the 185th is one of our premiere tanker wings in the country.

He says this visit helps energize him to carry the fight to Washington to keep the nation’s military funded at the level needed to support units like the 185th.

During the visit to Sioux City, General Rice met with members of 185th, toured the base and also visited the Air National Guard’s only aircraft paint facility that is located with the Air Refueling Wing.