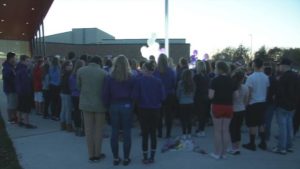 The girls were students at Linn-Mar High School and Excelsior Middle School. Mercedes Lehmkuhl, a friend of Isabella, spoke with KCRG-TV. “I didn’t know who (was killed in the crash). When I found out it was Bella, I just broke down,” Lehmkuhl said.

The Linn County Sheriff’s Department reports the girls were riding in a car with their mother and two other sisters when a pickup rear-ended them. The impact pushed their car into another pickup in front of them. The crash also injured the mother, Jennifer Perez, and the other two girls, ages four and 14.

Another friend of Isabella’s said they ate lunch together every day at school, which made Friday’s lunch hour especially difficult. “The whole time I was just staring where she’d usually sit and I just broke down in tears. I couldn’t handle it,” the girl said.

At the weekend vigil, the students prayed and let go of balloons with messages written to the girls. Lehmkuhl said Bella was “really nice and funny,” and had a great personality. “We love her and we will always remember her,” Lehmkuhl told KCRG-TV.

Many students wore purple to the vigil because it was the oldest, Selena’s favorite color. A GoFundMe account set up for the family has raised over $42,000 so far.

No charges have been filed in connection with the crash. The drivers of the two pickups were not injured.