You are here: Home / News / Party leaders offer predictions on eve of election 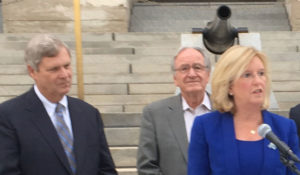 The leaders of both of Iowa’s two major parties are claiming momentum for their political “team” just hours before the polls open here for Election Day voting. Iowa GOP chairman Jeff Kaufmann spoke to reporters by phone earlier this afternoon. He’s predicting a Republican wave on Tuesday night — suggesting Iowa is turning Republican “red” rather than Democratic “blue.”

“It certainly looks a whole lot more like the setting sun than the deep blue ocean at this point,” Kaufmann said.

Iowa Democratic Party chairwoman Andy McGuire spoke during a late afternoon news conference on the steps of the statehouse.

“We are doing an incredible job of turnout and I do not think they have the organization that we have,” McGuire said. “We are going to work ’til nine o’clock tomorrow.”

The polls open at 7 a.m., giving Iowans 14 hours to vote in their local precincts.

“I don’t think there was any earth-shaking meteorite that Grassley is ahead over 20,” Kaufmann said. “I think there is a chance, quite frankly, that he will approach 30 when this is all over.”

Former Iowa Governor Tom Vilsack, one of the speakers at this afternoon’s news conference, scoffed at the polling data, especially on the Clinton-Trump race in Iowa.

“When I ran for governor, I was 23 points behind with three weeks to go. The Des Moines Register had a front page article that my campaign was over,” Vilsack said. “…We surprised people in November of ’98. I think we’re due for another surprise tomorrow night.”

Kaufmann is predicting Republicans could win as many as five seats from Democrats and take majority control of the Iowa Senate.

“Obviously, you’d expect the Republican chair to say that,” Kaufmann told reporters. “But if you look at the quality candidates we have, you look at the dollars that we have invested in those races…we feel pretty good about that.”

According to Kaufmann, the “trend line” for this election is that voters want “change” in their government at all levels and that includes replacing Democrats who’ve controlled the debate agenda in the Iowa Senate. The Iowa Democratic Party’s chairwoman suggested Democrats see a different trend line.

“Women leaders are driving this campaign. The majority of our volunteers are women. They’re working their hearts out to build the future we all want to see for our daughters,” McGuire said, “and our sons.”

According to the bipartisan “50/50 in 2020” group, there are a “historic” number of Iowa women running for city, county, state and federal office in 2016.