You are here: Home / Agriculture / Harvest getting close to completion for corn and soybeans 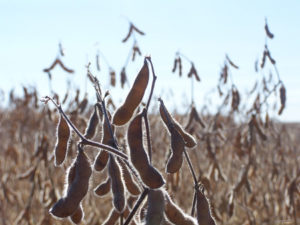 Farmers in northwest Iowa are waiting for beans to dry out.

The harvest is moving closer to its end for the state’s two top crops.

The U.S.D.A. crop report out Monday shows 86 percent of the corn has been harvest, which is four days behind last year and one day behind the five-year average.

At one point many farmers switched from harvesting corn to allow it to dry out and went ahead harvesting their beans. The soybean crop is now 95 percent done — which is one week behind last year, and five days behind normal. The report says the dry weather last week not only help with the harvest, but also with the moisture content of corn which had dropped to 16 percent.