You are here: Home / News / Loebsack: this is ‘very tough night’ for Democrats; Weaver may seek party leadership 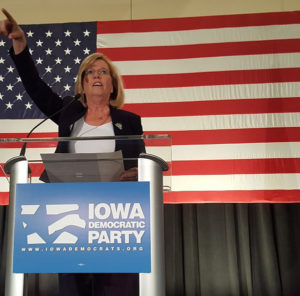 Dave Loebsack of Iowa City will remain as the lone Democrat in Iowa’s congressional delegation. During an interview with Radio Iowa, Loebsack acknowledged Iowa Democrats had a bad night.

“I think we’re going to have to have a lot of heart-to-heart talks and some soul-searching and go from there,” Loebsack said. “There’s no question that the party in Iowa is about as low as it can possibly be at this point and we’ll pick up the pieces and move forward and I’m looking forward to ’18 and we’ll see how it all works out.”

Loebsack, Iowa’s second district congressmen representing southeast Iowa, was first elected to congress in a “wave” election for Democrats back in 2006.

Radio Iowa asked Loebsack if he can work with a President Trump.

“I’m going to work with whoever the president is. That’s something I’ve said all along,” Loebsack said. “My hope is that Hillary Clinton will be the next president.”

Kim Weaver, the Democrat who lost to Republican Congressman Steve King in Iowa’s fourth district, may soon launch a bid to take over as chair of the Iowa Democratic Party.

“I just spent the last 14 months campaigning. I think I need to take at least a couple of days off, you know?” Weaver said, with a laugh. “But I do also believe that I understand what the party needs. I understand that we need to build up the party in our rural areas and it’s something that I’m very interested in doing.”

The fourth congressional district is about 50/50 — half of its voters live in urban areas and half are rural residents. Weaver faulted the current leadership of the Iowa Democratic Party for focusing too much on turning out voters in densely-populates areas.

“We can’t give up on the rural areas because that is how we lose the district,” Weaver said during an interview with Radio Iowa this evening.

Weaver, a single mother from Sheldon, is a social worker. Weaver said she can’t afford to take on the job of Iowa Democratic Party chairman on a volunteer basis.

“The party would actually have to pay me and, you know, they’re not necessarily willing to pay the chair to work full-time,” Weaver said.

The party’s current leader released a written statement tonight, but did not speak with reporters after it was clear Iowa Democrats would accumulate major losses. Iowa Democratic Party chair Andy McGuire said she was “proud of all Democrats for running terrific, issue-based campaigns,” but acknowledged Iowa Democrats are “disappointed by tonight’s results.”