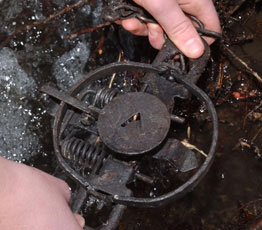 A wildlife expert at the Department of Natural Resources says the signs point toward a good season for trappers this fall.

The season opened this past weekend and DNR biologist Vince Evelsizer says the populations of what are called furbearers appear to be good for most species. “That includes everything from otters and bobcats to coyotes, foxes, beavers, muskrats and mink and that sort of thing,” Evelsizer explains.

He says the gray fox is the only animal that appears to be down in numbers. “Species that are harvested the most in Iowa are raccoons and muskrats and then coyotes and foxes are right up there too,” Evelsizer says. He says the variety of animals gives trappers opportunities in most Iowa counties.

“The trapping is done throughout the state fairly evenly,” according to Evelsizer, “areas that receive the 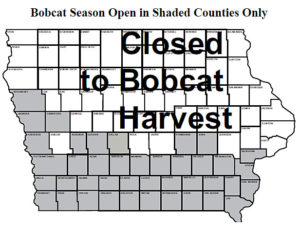 most trapping pressure are those areas where there’s good habitat. So, typically any area where there’s grasslands, wetlands or woods, there might be a little bit more trapping pressure in contrast to an urban area for example.” The state started a bobcat season back in 2007 and started with a quote on the number of animals that could be taken, but that was eventually lifted as the animal numbers grew.

“The bobcat season is the same, the bag limit is one bobcat. And…there’s a harvest zone which us primarily southern Iowa, and then it extends up into western Iowa,” Evelsizer says.

Evelsizer says some 15 to 16-thousand people buy a trapping license annually in Iowa and that number tends to fluctuate with the market prices of fur. The prices are down for the third year in a row and he says the number of trappers could drop. Most seasons end January 31st, except for beaver, which extends until April 15th.

Photo and graphic courtesy of the DNR.