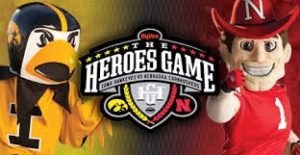 With the Iowa-Nebraska football game two weeks from today, the top elected officials in both states are hoping to take the annual rivalry to a different level.

Kara Kelly, regional spokeswoman for the American Red Cross, is calling it the Governors’ Challenge.

“Iowa Governor Terry Branstad and Nebraska Governor Pete Ricketts are challenging their citizens to participate in a friendly face-off,” Kelly says. “They want to see which state can raise more money to support Red Cross Disaster Relief. This is all around the annual Hy-Vee Heroes game which is November 25th.”

She says it’s easy to contribute and the donations are used to prepare for, respond to and help people recover from disasters of all magnitudes.

Every eight minutes, the Red Cross provides hope and comfort to people affected by community disasters.

“The money raised for disaster relief goes to support disasters large and small,” Kelly says. “Large, thinking about the recent disasters in Louisiana and Hurricane Matthew and even the flooding in northern and eastern Iowa, while the smaller disasters, we’re talking about those day-to-day home fires which our volunteers respond to 24-7, 365 days a year.”

The Hawkeyes are hosting the Huskers at Kinnick Stadium in Iowa City this year on the Friday after Thanksgiving for the sixth annual Heroes game match-up.