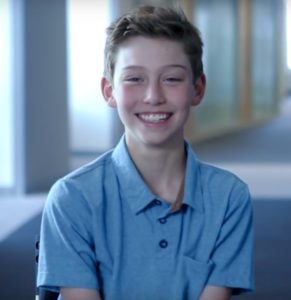 A 13-year-old Mason City boy who has a rare form of muscular dystrophy will serve as an honorary “Kid Captain” Saturday night when the Iowa football takes the field against second-ranked Michigan in Iowa City.

Hayden Despenas was named after former Iowa football coach Hayden Fry. “I have a disease and I can’t really stand for a long time or walk,” Despenas said. “I have to be in a wheelchair so I can get around easier.” His story is documented in a video posted on the UI Children’s Hospital website. Hayden has been getting care at the hospital since 2012.

Hayden’s mother, Sarah, says her son was in second grade when he was diagnosed with Friedreich’s ataxia (FA). “There’s an overwhelming sense of just desperation, grief, and sadness over the loss of what you wished for your child,” Sarah said.

FA is an inherited disease that causes progressive damage to the nervous system and shortens life expectancy. The sister of Hayden’s father, Dana, lost two kids to FA. “At that moment, in that despair and that urgency, you make a decision,” Sarah said. “You either crawl in a hole and go into extreme denial or you decide to become an active part of trying to find a cure and making your child’s life the best it can be. That’s what we decided to do.”

UI Children’s Hospital pediatric neurologist Katherine Mathews has been working with Hayden. Sarah recalled one of their first meetings with Dr. Mathews and how Hayden told her he wasn’t going to school because he was too tired and sick. “She said, ‘I know you don’t feel good, you have Friedreich’s ataxia. I know you’re tired, but my patients with Friedreich’s ataxia go to college. They get degrees. They get jobs. They live their lives.’ That changed everything for Hayden,” Sarah said.

Hayden is now thriving in school. He’s also an honorary Mason City firefighter and is involved in a number of organizations raising awareness and funding for FA research.