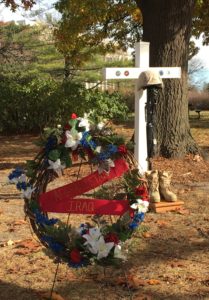 Veterans Day ceremonies are being held throughout the day and throughout the state. There was an outdoor ceremony on the statehouse grounds in Des Moines. Wreaths were laid on memorials to veterans of the wars in Korea, Vietnam and Iraq.

Miller is a veteran who served as a chaplain in the Naval Reserves from 1988 to 1992.

“Isn’t it very interesting that that sentence: ‘Thank you for your service,’ has no clear of sense of tense?” Miller said. “And I think it’s appropriate because what society ought be doing on Veterans Day is thanking veterans for their service past, present and future.”

Miller is the dean of global ministry for the “ChurchTech Institute” and he will be in Iraq next week to distribute aide to people in refugee camps.

Ainsworth, Iowa, native Jerry Gipple is a Vietnam veteran. The 73-year-old now lives in Urbandale and makes it a yearly habit to attend the statehouse ceremony and visit the Vietnam Memorial there where the names of the Iowans who died during the war are listed.

“I have a friend over here on the wall, so I see him,” Gipple said.

Gipple was a sergeant first class in the Navy and then joined the Iowa National Guard. He served as a medic and his grandson is serving in the military today.