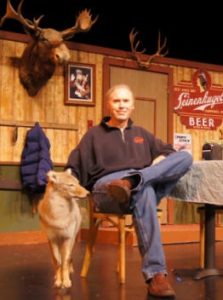 The Midwestern premiere of a new comedy called, “A Nice Family Christmas,” was held last night in Webster City.

Playwright Phil Olson, who lives in Los Angeles, wrote the series of “Don’t Hug Me” musicals that follow the lives of oddball characters in fictional Bunson Bay, Minnesota.

“There’s just nothing better for a playwright than to have that kind of great response,” Olson says. “I had the greatest time. The notes are good. I’ll do rewrites on it based on things I need to change and fix, but it was spectacular, the response. It was like a sit-com laugh track. I’ve never seen that before.”

Olson is a national award-winning playwright with 14 published plays that have been performed in more than 300 cities around the U.S. and Canada.

Olson is an Edina, Minnesota, native and says the new comedy is loosely based on real life and experiences with his own family on Christmas Eve.

“I wrote this one many years ago,” Olson says. “We were home for Christmas and my mother announced or it was discovered that she had cancer, so, I kind of wrote this for my mom.” The play also debuted in Los Angeles last night. It will be performed onstage this weekend and next weekend at the Webster City Community Theatre.