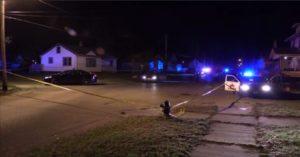 olice have identified a young woman who was shot to death this weekend in Waterloo. Talasa Wright, 19, died from her injuries at a hospital. Police found Wright inside a car, near the intersection of Linn and Gable Streets, after responding to a “shots fired” call at 11 p.m. Friday.

Ann Henderson, who lives in the neighborhood, told KCRG-TV she was watching TV at the time of the gunfire. “There are a lot of kids in the neighborhood and when I heard a lot of noise, I just looked out my window and thought it was just kids,” Henderson said. “Next think I knew, I hear a bang…and then bang, bang, bang. After that, I hit the floor and I was done.”

Two other people were in the car with Wright, but they were not injured. Police have not made any arrests.