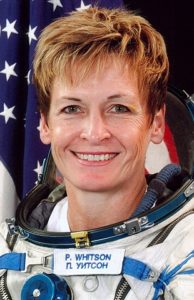 Iowa native astronaut Peggy Whitson is in Kazakhstan, awaiting Thursday’s launch of a Russian rocket that’ll take her to the International Space Station for her third mission.

Whitson grew up on a farm in southern Iowa’s Ringgold County near Beaconsfield and during one of her previous space missions, nutured a small crop of soybeans. She’ll be space-farming again during the coming six-months in orbit.

“I am growing a couple of things,” Whitson says. “There’s some different types of basil that I’m growing and there’s another wheat germ-type of plant, various plant investigations looking at how different plants grow. Obviously, we are looking forward to the future where we are going to need to basically have plants with us in order to go on future exploration missions, like to Mars.”

The space station has grown since Whitson was last there, with new labs and a better view through the famed cupola. Many of the compartments are school bus-sized and the full station is now about as big as a football field. She’s excited to learn about its new capabilities. 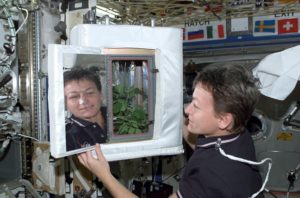 Whitson checks on the soybean experiment aboard the space station in 2002.

“On my last flight, we first tested the oxygen generation system and this time, the urine processing facility is up and running, water processing facility,” Whitson says. “It’s going to be fun for me to see that whole life support system coming together and be able to participate and utilize that.”

It will be more crowded this time, too. The station had a crew of three during her most recent mission but this time, there will be six people on-board — Whitson and another American, three Russians and a Frenchman.

As for the six months ahead, the Beaconsfield native says she has no specific goals.

“One of the things you learn with spaceflight is the only thing that’s for sure is change,” Whitson says. “Trying to have a specific goal assigned to a specific activity tends to set you up for failure. This way, I just have the goal of accomplishing as much science and various activities that need to be done.”

Whitson has already logged 377 days aboard the orbiting station during missions in 2002 and 2007. In February, she’ll celebrate her 57th birthday there and will be the oldest woman ever in space. Among her many accomplishments, Whitson will be the first woman to command the station twice.

Launch aboard the Soyuz MS-2 spacecraft is scheduled for 2:20 PM Central time Thursday.

Hear the full interview below.